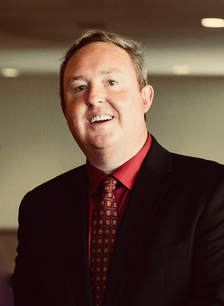 Dean Wilson joined Christian Legal Aid of Los Angeles as Executive Director in 2018. He is a graduate of Westmont College in Santa Barbara, California with a BA in Communication Studies.
​
Dean is pursuing life as a "Kingdom Adventurer"--seeking to bring hope, laughter, love and life in the spirit of Jesus to those around him.

Dean began his career in financial services with Morgan Stanley and Wachovia Securities--eventually becoming a Vice President and Assistant Manager--and partnered in the management of client assets. He was ranked #1 in his training class and featured as a speaker at various training events around the country.

Dean moved on to become Executive Director of a non-profit organization in Southern California where he pioneered a model for low-income housing facilities that has impacted thousands of families. The model included partnerships with local police, government agencies, companies, non-profit organizations and individuals. The programs included several components designed to improve the life of children: music, art, gardening, tutoring, sports, performing arts, field trips, mentoring, and computer education. Dean's work also included reaching out to the special needs community with employment and by developing partnerships with the Special Olympics, The Institutes for the Achievement of Human Potential, and others. Dean's work earned him a place on the "Ten at the Top" list in a local California magazine as well as other accolades.

Dean was eventually the visionary and lead co-founder of Behind Every Door in the Dallas-Fort Worth area, which, by the grace of God, has brought about neighborhood transformation in some extremely difficult areas. Statistics show that crime reduction at times reached 90% at Behind Every Door properties. At the properties in which he has served, Dean has launched programs such as "Real Men" and "Sons of a Loving Father" to inspire and equip men, old and young, to be everything God designed them to be. Behind Every Door has received significant grants from One Hundred Shares, Clayton Kershaw's foundation and many others. Starting with zero in 2009, Behind Every Door now receives support and volunteer hours from hundreds of individuals, companies, and foundations throughout Dallas-Fort Worth. The work of Behind Every Door has been highlighted by various media outlets including local CBS and NBC affiliates and D Magazine.

Dean has worked in the private sector as well. He was the founding CEO of THRIVE Intelligence and several other start-up companies in the technology and security sectors. These roles included Dean raising millions in private equity and managing large teams.

Dean has raised financial support for several non-profit organizations in his career--including collaborating for two years in the Texas region toward the raising of over $1.2mm annually for Mission India--an organization that plants churches, hosts Children's Bible Clubs, and works in adult literacy in India.

Over the last 15 years, Dean has offered consulting services as well. His most recent project was launching a new initiative to provide curriculum via a mobile app to high school student-athletes for Character and Leadership--a company based out of Michigan.

While earning his degree at Westmont, Dean played varsity baseball, served as "Sportstalk" host and General Manager of the campus radio station, wrote a sports column for four years for the campus newspaper, and eventually became Student Body President.

Dean has a passion for people, especially those who may be hurting or struggling. He loves to bring the Good News of Jesus Christ to the world around him. Dean and his family have been involved in numerous projects to serve and advocate for the poor as well as the special needs community--including as leaders of the special needs ministry at Gateway Church.

Dean and his wife Susan have been married for 21 years and have 5 children: Hannah, Grace, Ella Claire, DJ and Luke. Dean's interests include coaching Little League baseball, football and YMCA basketball--as well as rooting for the Dodgers and Lakers and playing an occasional round of golf.